It seems a bit self serving to talk about myself and my funk here. Suffice it to say, the cleaning I did yesterday did MUCH to alleviate my stress. I actually slept well last night. Still have the office to contend with, but I can do that. That, I can do. I watched the last two discs of Sports Night which was a great motivator and then the first two episodes of Mad Men Season One. Nice tv. Niiiiiiiice Tv.

Today though, is today. And oddly enough it reminds me of Kizz. . . who chooses not to speak out about it in this kind of forum. Totally fine. She always sends us here, and go read more about it at her place. I kept her voicemail on my old cellphone saying, “something bad has happened in NYC. Im ok. I’ll talk to you soon, and I love you” I used to listen to it. That day? I listened to it a million times.

A few years ago on one of my Take A Group of Hairstylists To NYC trips, we were there on September 11th. It was one of the girls’ birthdays. We spent the drizzly, drearily, overcast day lumbering around down in SoHo and Little Italy. We saw families gathering, uniforms en mass, a general somber tone to the city…my city…our city.

That night we celebrated her birth at Cowgirl. It was awesome, save for one persnickity snot who wore us ALL out that week. (we still to this day talk about what a pain in the ass that girl was!) It was a night full of great food and fun experiences and first times for soooo many of the girls. On our way home, tucked safely into cabs via Kizz, I turned around and saw this: 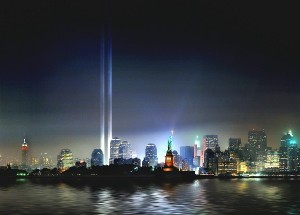 and I was so happy and proud to have been there that day.

The world IS forever changed. It is. That cannot be denied. However, that night there was laughter and there were friends old and new and there was celebration.

Some things refuse to disintegrate.