So this woman in the show, that I play opposite of, is WEARING ME SMOOTH OUT!!! I feel I am in a tricky position here. She’s needing direction desperatly. Things like slow down. Don’t work so hard on line memorization right now. Don’t worry about the “bits” we’ll do until we get the gist of the scene. SLOW DOWN. There’s a difference between high energy and speed. There is a fine line between authentic and campy. . . draw that line and stay on the authentic side. These women are real. There is no wink wink nudge nudge going on.

But….it’s only three rehearsals into it and we’ve blocked act 1 and really no notes on anything at this point and that is fine by me. EXCEPT, most everyone in the cast has some experience, and she really doesn’t. I feel like she NEEDS that early information before she works herself into things that cannot be undone later.

Someone tell me to shut the eff up. That I’m not directing this gig. So just learn my lines and work the part and let that be that.

It’s not a power trip, or an ego thing. I swear it’s not. I just can see this woman getting all bunched up and freaked out over stuff because she’s just kind of going on her own…we all did that at one point before we were told what and how to work through it.

Ok. I feel better just having purged all of it. Other than that, the show is going fine. We really don’t have a lot of rehearsal time, and it may wind up being somewhat more Waiting for Guffman than Nederlander Productions but that’s fine. Fun Fun Fun.

In other news, Mom closes on her house at 3:00 tomorrow!!! Can I get a HUZZUH?!?!? We’re leaving around 4 or so tomorrow and coming home sometime on Sunday. Another quick trip but I want some downtime at the home. And I want to go to Paseo Arts Festival. It’s my favorite fest we have here. Great local art by fantastic artists. I always buy something from Garden Deva. LOVE THEM!! Go look at their site! I have several pieces already. This year I’m looking for a cat of some sort!

I don’t watch American Idol, but I guess that was a big deal last night. I mourn the end of t.v. Summer tv is all reality all the time and BLEAGH. Have any of you seen the commericals for the Ex-Wives Club? Shar Jackson, Marla Maples (where the hell has SHE been?) and Angie Everhardt are helping couples on the brink of breaking up…someone hand me a vomit bag. Bring on SEPTEMBER!! Not really, because I’m excited for summer, but you know what I’m saying.

Alli and her bfriend are coming over tonight for dinner and hair-doings. Chicken fajitas and grilled corn. YUM-OH!! Though her hair is ridiculously thick and takes me foreveah to do, it’ll be a decent evening.

What are your plans for this weekend? It’s the kickoff to summer! I’ll be back when I can, and when I do it will be a mere few days until OCEAN’S THIRTEEN!!!
Huzzah and Happy Thursday! I really do love George Clooney. He’s lost some weight lately. Maybe he needs a chicken fajita…. 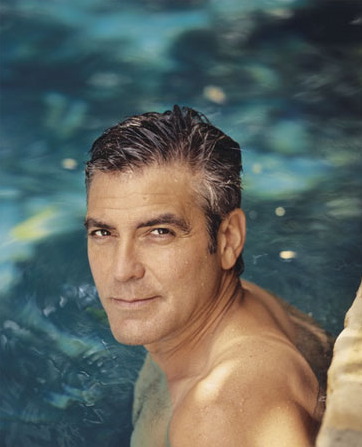 6 thoughts on “Ya Gotta Have Faith (clap clap clap)”