. . . and the world’s your oyster. . .
Went up to the bar tonight. It’s been a miserable fucking week weatherwise, miserable rain all day today and frankly we just needed a night out…

The bars are temples but the pearls ain’t free. . .
Called up Gertie and Joe and while the conversation went something like this:
“bar”
“yes”
“weather sucks”
“fuck yes”
“drink now”
“pulling in now”

there were even less words actually involved. We were on word salad at that point.

You’ll find a god in every golden cloister. . .
After about fourteen rounds of delicious adult beverages the tables turned and WHOO MY GOODNESS THEMS THERES BOYS IN HEARAH!!!

And if you’re lucky then the god’s a she. . .
Joe found himself one at the bar and though he proclaims LOUDLY that the words never left his lips I swear to all that is golden fried fabulous I heard the words. . . (in a very Homer Simpson looking at a doughnut kind of voice) I’m liking the Asian one. . .

I can feel an angel sliding up to me.
By the end of the evening we were/are all sliding. Fun. We had skits written out starring the one legged ex-Beatle’s wife that SNL would SALIVATE over…look for Joe’s next Ten Thinsgs Tuesday for that one. We laughed. Gertie cried. There were texts and songs and roses involved….

All in all quite a grande finale to such a crap-i-licious week.

Huzzuah and Happy Saturday. My Friday. and I love George Clooney. 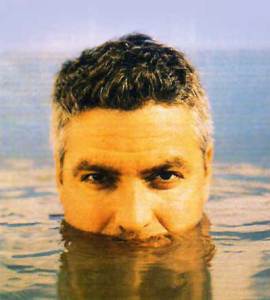